The rapid development of domestic high-tech has led to the maturity of wireless broadband network technology. At present, the establishment of large-scale monitoring systems within enterprises has become an important goal of information construction in large-scale factories and mines, parks, scenic spots and roads in China. Among them, the wireless bridge occupies a dominant position in the wireless monitoring system. Because of its convenient installation and stable transmission advantages, it is favored by the majority of engineering companies. Let us talk about the four main usages of the wireless bridge. 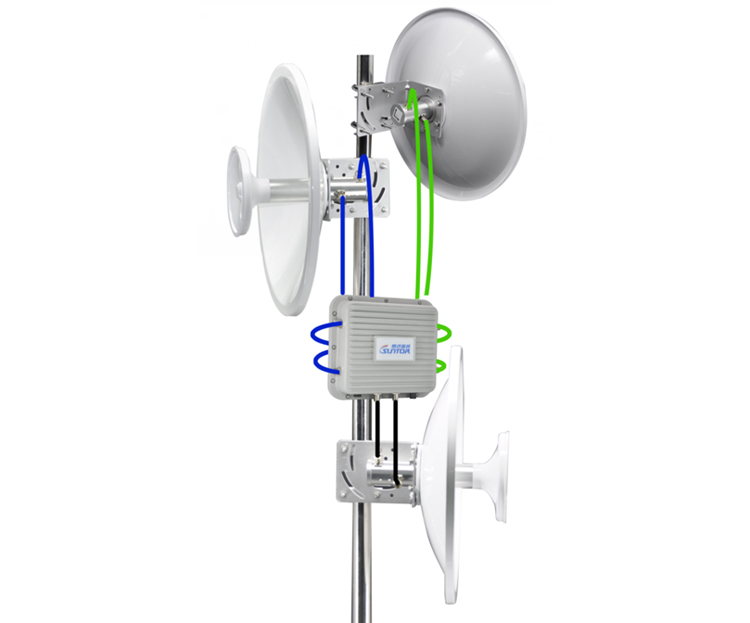 First, do bridge to bridge:
The bridge is named as a bridge: as a network bridge for local area surveillance video signal transmission, it is equivalent to a suspended invisible network cable, which is suitable for use in the environment where the transmitting end and the receiving end bridge are mutually visible, that is, an environment without obstacles in the middle. Underneath, it can be used for point-to-point bridging at near and far distances. For example, the transmitting end uses a high-power wireless bridge + directional antenna to cover, so that it can achieve more than 30 kilometers.
Widely used in urban and rural, rural wireless network coverage operations, corporate or home wireless broadband long-distance transmission, remote wireless network monitoring. The transmission distance is long, the speed of the network is fast and stable, and the environment can be easily solved by using the bridge without the environment of laying optical fiber cables with open roads, and the construction is quick, simple and low in cost;
Second, do AP use:
It is used to convert the wired network into wireless signal for wireless devices. It is suitable for wireless coverage with close range. For example, when it is equipped with 12DB omnidirectional antenna, the receiving end can also use the bridge to achieve a visual distance of about 600 meters. If you use the built-in directional antenna to cover, you can achieve about 1.5 kilometers, the horizontal coverage angle is about 30-60 degrees (the closer the distance, the larger the angle), if the receiving end uses a mobile phone or a normal wireless network card, you can only do a few Ten to 200 meters (due to the difference in power and performance of the wireless network card);
Third, do the client:
After receiving the wireless signal, it is converted into a cable for computer Internet access. After receiving, it can be directly plugged into the computer network card to access the Internet. It can also be connected to a switch or wireless router for multiple computers or mobile phones. The general premise is: If you are outdoors If you want to install the bridge, you can use the built-in wireless network card or mobile phone to search for the wireless signal that you want to connect to CMCC or ChinaNET, and you can see the transmitting base station. Then you can install the bridge in the same position and align the base station. To receive, after receiving, the wireless will be wired to the computer wired network card. If the notebook can not find the wireless signal you want to connect outside, it may not be guaranteed by the bridge;
Fourth, do relay:
Wireless monitoring is used in outdoor large-scale remote monitoring projects, such as occlusion in remote areas such as forests, islands, oil fields, and mining areas. In the case of occlusion or when the transmission distance is too far and cannot be transmitted at one time, it is recommended to use the relay mode to transfer the signal of the front end to the monitoring center. The more times you transfer, the more the wireless signal will decay. In order to ensure sufficient bandwidth during transmission, and to reduce signal attenuation, a long-distance high-power wireless bridge can be used.
With the increasing awareness of people's security, the demand for wireless monitoring is also increasing, so wireless bridges are increasingly used in various fields. It is especially important to choose a suitable wireless bridge supplier. In addition to providing industrial performance products, a good supplier also provides technical support from a professional technical team and after-sales team. Tengyuan Zhituo is such a company. Each product is obtained after 6 months of actual testing, and has offices in various parts of the country. It has professional technology and after-sales team to protect your products.

Electric Hoist, can be used indepently, or together with cranes, it has Wire Rope Electric Hoist and Electric Chain Hoist two types. It can travel rotation through the trolley hanging on the I-steel, and install on the Single Beam Crane, Gantry Crane , Jib Crane , overhang crane and monorail crane to rise and fall the cargos. So it can be used in factories, mines, wharf, warehouse, freight yards, and shops and so on which need lifting equipment for lifting heavy objects. Such as mining companies and railways, docks, warehouses. It is prohibited to manned.